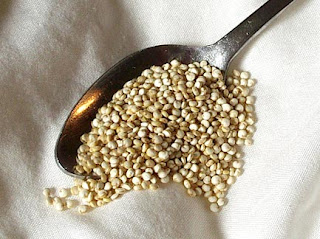 A few years ago I discovered quinoa at a potluck party. The dish was made with tomatoes, basil, garlic and roasted eggplant. I loved it and began replicating it at home. It became one of my staple foods.

Here it is a few years later and my kids won't eat it and I don't bother making it for myself. Until today.

What I really craved was a bowl of hot polenta with nuts, raisins, butter and maple syrup (a'la Guerilla Cafe) But I didn't have any polenta and it was pouring rain so there was no way I was going out. I DID have rice, bulgur and quinoa. I decided on the quinoa and cooked it up according to package direction, using apple juice instead of water and, at the end, mixing in walnuts, raisins, blueberries and butter. The chewy texture of the quinoa didn't satisfy the need for smooth hot porridge, but it tasted delicious and I ate a bowl.

Fast forward 2 hours and you see me in fetal position on the sofa. Moaning because my stomach felt like it was twisting itself in knots in an attempt to exit out my navel. The pain was excruciating. I won't go into the details of the illness, but it wasn't pretty. And it lasted all afternoon.

At some point I felt well enough to get online and google my symptoms. Suspecting the quinoa, I added that to search. Sure enough, I landed on a blog post called "Just Say No To .... Quinoa." Although the writer had different motives for consuming quinoa than I, she had the exact same experience - calling it a "quinoa hangover" and blaming it on saponin - the natural oily residual on the grain that needs to be WASHED OFF because it is bitter tasting and used to make DETERGENT.

I didn't wash my quinoa. My stomach hurt bad enough that I will not chance eating the grain again. EVER. Washed or not. There is no guarantee I can wash it well enough - each and every tiny grain. I don't want to take the chance. It's sad, cause I liked quinoa and it's very good for you (saponin not included). But, I stress again, for me, it's not worth the risk. Ouch.

Can't wait to get my hands on some polenta.
Posted by Cori Kesler at 7:52 PM