I saw only the tail end of the Presidential Debate last night, so I missed Romney's comment about "women in binders".  My twitter stream, however, was paying full attention and blew up with quips and comments hash tagged #womeninbinders. Within minutes there were facebook pages and groups, tumblrs, twitter handles and memes. I could write about how fun this collective conversation is, but my friend Tara Hunt has already done that beautifully on her blog post this morning.

I have a different story to tell.

Eleven years ago a friend of mine decided that she couldn't wait any longer to have a baby. She was nearly forty and financially secure. With no volunteer fathers among her friends, she made her way to a bank. A sperm bank. Once there she was presented with binders full of questionnaires completed in handwriting by potential donors. (Incidentally, I also missed Romney's stance on single parents, but I gather from what I've read that he would not approve of my friend - or me, for that matter.)

She tells of sitting in the bank's private room, browsing through the binders, reading the donors' answers, analyzing their words and the curves of the letters, the crosses on T's and the dots on i's. It was like catalog shopping, she said. Choices included men of all races and religions, tall, short, rich, poor, educated and not. She went back several times over the course of six months before finding the "match" that was right for her.

Now my friend has a beautiful, intelligent daughter in the sixth grade at a competitive private music school. She has done an amazing job raising this little girl but, with all seriousness, she credits having chosen the best man from the binder.
Posted by Cori Kesler at 9:59 AM No comments:

It's NOT Always About You 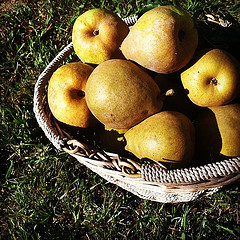 Last week two friends came to pick up some pears from my tree and they happened to cross paths.  I've known both of them for more than 20 years; one more than thirty. Naturally they've seen each other from time to time at my (ever more infrequent) gatherings and dinner parties. The two exchanged warm hellos and briefly caught each other up on main life events.

As I handed over the pears one friend had to leave, said goodbye to us both, and left out the front door. The other friend looked at me and said, "did you see this? We're dressed exactly the same!!"

I got up and turned around (there's a mirror on the wall) and we stood there, side by side, sure enough, "brown long sleeve shirts, jeans, black vests, black shoes... Look at us!" and we burst out laughing. It's funny because we are both 43 year old newly divorced moms who have been friends since Girl Scouts and somehow continually reflect each other - right down to the clothes we wear.

She stayed a while longer then had to run off to get her kids.

Fast forward three days and I receive a call from the first friend - the one who left early. "I wasn't out the door two seconds before you girls started making fun of me!!"

"There is NOTHING WRONG WITH A BROWN SHIRT!" he yelled, "I heard what you were saying - those windows were wide open! You should be ashamed."

After I recovered from my bewilderment and figured out what he was talking about I told him he had misunderstood and reiterated the actual conversation.

He was silent for a moment, then said, "I've been feeling bad for two days thinking you were making fun of me."