Summer of the Fleas

Back in May I volunteered to watch a friend's small dog because I thought it would be fun for the kids - Maia in particular. She loves little dogs. In fact - moving past the fact that the dog wasn't really house trained and that it irritated the hell out of Moses the Dog, our large Shepherd mix - we had fun with it.

The little dog stayed for almost two weeks and on the last day, while waiting for my friend to pick it up, I saw a flea scurrying across it's back. Whoa! I haven't seen a flea since I was in college when my cat had them. We used to give Moses flea medication, but since the marriage ended (three years ago) I've not bothered (that stuff is expensive!) and because Moses is basically a solitary dog, he's been fine. Nary a flea or tick in site. Ever.

Towards the end of June small little bites started appearing on my ankles. They itched like crazy and I suddenly became aware of Moses's frantic scratching. Uh... do we have fleas? So I vacuumed, did tons of laundry and Ex brought me some topical flea medication to put on Moses's back. I even made a flea-trap. It didn't get better.

By the first week in July it was so bad that I felt like the little buggers had taken over my life. I was in pain and woke up every morning with new bites. A friend who had suffered the same fate years earlier took me under her wing and let me sleep in her guest room (while the kids were at their dad's). My first night there I slept for 16 hours - it was SUCH a relief to be rested and to wake without a new bite. She helped me devise a concrete plan to rid my house of the pests and gifted me $500 to help me see it through. (And thank goodness! See cost list below). The plan of attack (literally) included an arsenal of itch-relief medications for me; medications, shots, baths, and boarding for Moses; flea bombs and professional treatments for my home. My friend  recommended Fleabusters and I called to make an appointment. In the days before they came I boarded Moses and bombed the house. Twice. I did it again a week after they came because Fleabuster treatment takes six weeks to work and I was leaving town anyway... And then, when I returned, another friend helped me vacuum my one room with carpeting (the room that serves as both my bedroom and my office). Over and over. And over. 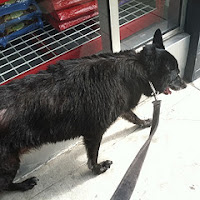 It's now the end of August and the situation is much better but it's not finished. While Moses is now clear (on a double treatment of Comfortis and Advantage), I'm still seeing a flea here and there and I definitely got a new bite last night. Yesterday marked six weeks since Fleabusters treated my home and tomorrow morning I'll call them on their one year guarantee. Hopefully they'll come and treat the house again and six weeks from now I'll really be out of the woods. What is that? Second week in October? Here's to a flea-free Halloween.


PS - for whatever reason, the kids were not bothered by the fleas and didn't get any bites. Or if they did get bites they had no reactions to them.


Summer of the Fleas: Costs
$425 Fleabusters
$300 bombs (3 each, 3 times) and sprays
$300 medications, shots, washing and boarding Moses
$80 professional housecleaning
$100 anti-itch creams and lotions for me
GRAND TOTAL: $1205 (and the reason I didn't get a new computer monitor this year.)
Note that this list does not include the many hours spent vacuuming, laundering and sleeping at others' homes.
Not to mention the physical pain suffered from the bites. Scars will last for years.
Posted by Cori Kesler at 4:05 PM 1 comment: