Fashion Institute onTechnology dorms on 27th between 9th and 10th Avenue.
Because of my mid-year arrival all the dorms were taken so I, along with two other transfers, were placed in a cleaned storage room stuffed with a bunk bed, a twin and three desks. One roommate was a spikey-haired goth punk who quickly obtained a job in The Village. The other was a Catholic gal who was practically engaged to a man with whom she'd never had sex. We ate at the school cafeteria with the rest of the students. I consumed a lot of cereal and the only reason I didn't gain the freshman ten is because I took a part time job at a health club.

July 1987 - October 1987
One bedroom on the fifth floor of a 5-story walk-up on 46th Street between 9th and 10th Avenues
The punk roommate and I escaped dorm life for Hell's Kitchen. We shared a bedroom in a tiny oddly shaped apartment for which we paid $750/mth. She liked to sleep late. I'd go to the corner and eat at the diner. It's still there - the Galaxy, it's called. We were robbed the week we moved in. From my bedroom window I could watch the street and thus uncovered which prostitutes belonged to which pimps and the best way to outsmart the cops during a raid (throw your lollypop in the street, put on your coat, hang your purse on your shoulder and walk with purpose. The ones who ran always got caught.) I transferred to Baruch on 24th and continued working at the health club.

October 1987 - February 1988
Large one bedroom on the 28th floor of a Luxury Doorman Building on 36th Street and 1st Avenue
After a fallout with the punk roommate, and with the financial help of extended family, I moved across town to share a one bedroom apartment with a gal who modeled. Funny thing is, she was incredibly unattractive, though tall and thin with long hair. She had lots of pretty lingere... In retrospect I'm sure she was an escort. I kept going to school and working at the health club. Eventually the roommate went postal on me - accusing me of stealing clothes, if I remember correctly... I moved.

March 1988 - January 1989
Studio Garden Apartment on the basement floor of a seven story building on 83rd Street near 1st Avenue
Having been completely put off any sort of roommate scenario, I found a studio apartment on the Upper East Side and transferred to Hunter College. The studio had a door to a "garden" with a table to eat outside. It was my first time living alone - I sewed curtains and cushions and made the space a home. It was beautiful and I loved it there until the mouse arrived. After my landlord stuffed the hole from where it came, the mouse couldn't get back outside so took up residence behind my stove - driving me nearly crazy.

I was 19 years old and I quit my job at the health club and transferred to UC Riverside.
I never had another opportunity to live in the city again.
Of course, life's not over.
Posted by Cori Kesler at 10:14 PM No comments: 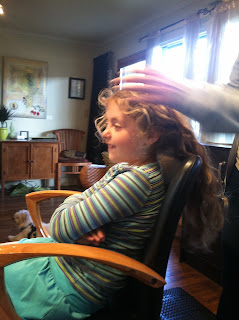 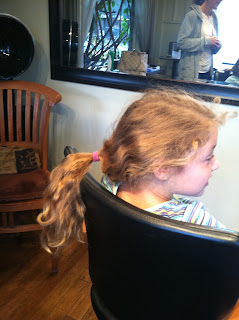 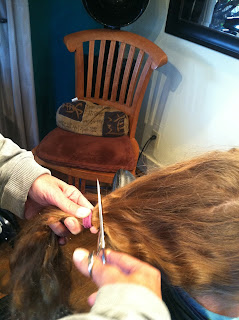 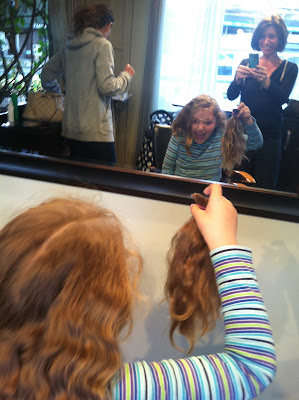 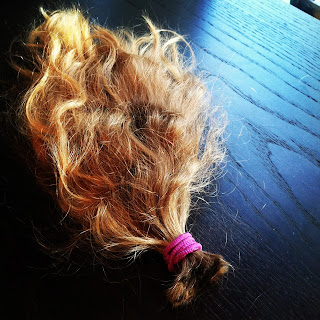 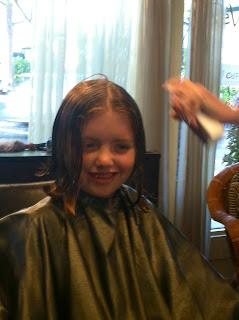 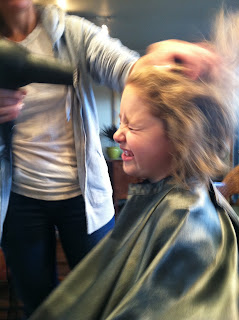 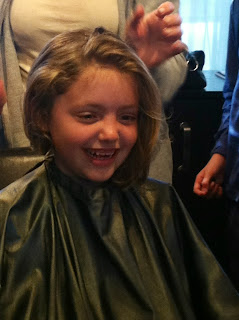 Posted by Cori Kesler at 5:27 PM No comments: 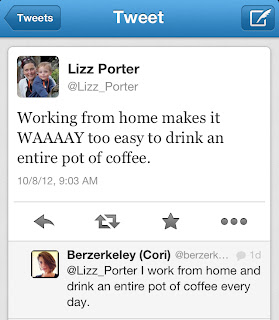 Reading and responding to Liz's tweet yesterday morning prompted me to contemplate my own coffee habit.

It's big. And it has a routine.

Ironically, it all begins minutes before I retire for the night: I prep the coffee maker. Cleaning the pot and catching a whiff of fresh grounds as I pour them into the filter is a promise of good things for the morning.

I rise at six so I can enjoy an hour of quiet before waking the kids. As I walk to the shower,  I stop by the coffee machine and tap the "on" button. By the time I'm cleaned up, there is a full pot waiting.

Poured into a favorite mug and doused with a healthy splash of half and half (no sugar!) I return to my bedroom, dress and relax with my coffee while catching up on facebook, twitter and emails from the night before. It's my favorite part of the day.

Throughout the morning I drink coffee - while making breakfast for the kids, in my travel thermos on the way to school, a final cup when I get back before starting work.

Around four in the afternoon I start jonesing for another cup. There are several different ways of going about this. The first, and least glamorous, is to simply reheat the morning's coffee. Alternatively, if it's a hot day I pour myself an iced coffee using what's left in the pot and coffee ice cubes made the day before. (That's right, the last thing I do with the puddle at the bottom of my pot is pour it into trays and pop them in the freezer. Coffee cubes mean I don't have to worry about a weak and watery drink.) Finally, I might get my afternoon coffee by brewing myself a single cup (using pour-over method) or taking myself out to a cafe.

Sadly, this entire routine is being somewhat thwarted by Invisalign, but I'm managing... Coffee is more than a drink for me - it's a symbol of renewal that promises a fresh start.

Of course, it also keeps me awake.
Posted by Cori Kesler at 4:45 PM 1 comment:

During the past four years I've been (cue sarcasm) lucky enough to have developed a tongue thrust in which - particularly at night when I'm clenching my teeth - my tongue presses against my teeth. The result is teeth that have shifted, leaving gaps and spaces that provide a less than perfect smile.

Never mind cosmetics, the fact is that - unless I do something - my teeth will continue to move outward until they eventually fall out. Seriously.

After consulting several orthodontists it was decided that Invisalign was the best choice for my particular issue. I'd spend 10 months straightening my teeth and then wear a retainer-type thing every night. Forever.

The process started ten weeks ago, but I've been wearing the trays for only four. The idea is that you wear these trays 22 hours a day - taking them out only to eat and drink. After you eat, you must brush both your teeth and the trays before returning them to your mouth.

This has been a HUGE disruption to my life. I like to spend the mornings sipping coffee. Meals aren't as big a part of my life as is snacking on almonds and berries. All. Day. Long.

Now, every time I want to take a bite or a taste of something the trays must be removed. And it's not an easy process. It takes me a few minutes. Sometimes I have to use a special tool to prod the plastic off my teeth.

Needless to say, I've been taking less bites, sips and tastes. It's not so easy to snack on grapes while driving home from the grocery store, stop for a quick coffee, taste food samples at CostCo or TJ's. I have to be much more mindful of when I eat and where there is a suitable place to brush my teeth after doing so.

I hate it. Nine more months to go.

Fifteen years ago (give or take) my new live-in boyfriend (to eventually become my husband and then my ex) built a desk for me from two saw horses and a door. He claimed it was what all the cool studios were doing ...

Regardless of the "cool studios", the desk didn't work for me. I replaced the saw horses with two-drawer filing cabinets and set out to find a keyboard tray to make it a real desk.

I soon discovered that keyboard trays came in a variety of models - from a very simple roll out drawer to a platform that could be adjusted every which way for "correct ergonomic posture." Ergonomic language was just beginning to get popular and I decided that since I was going to be sitting at it all day, it would be best to be comfortable.

The tray I chose not only rolled in and out from under the desk, it also rotated right and left and the platform itself could be placed at an angle. It was more than a hundred dollars and a huge splurge for me at the time. Furthermore it was one of my first substantial online purchases. It came from an office supply store in New Jersey and took more than two weeks to arrive

The keyboard tray has been with me through three different desks (including the door) and has kept my wrists straight and my elbows at right angles and - despite thousands of hour in front of my computer since 1998 - I've not developed carpel tunnel syndrome. 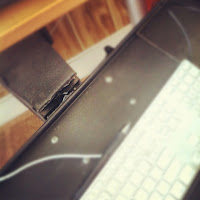 Today it broke. And not in a way that can be fixed.

Swamped with work and hoping to get the job done quickly I rushed over to Office Depot thinking they'd have something. Nope. They suggested IKEA - a place that I would never ever venture on a Sunday afternoon.

So I'm online again - looking for keyboard trays. Funny: they haven't gone up (or down) much in price but there are many more from which to choose. What HAS changed is that I'm searching via Amazon instead of Yahoo. Furthermore, I'm limiting my search to "Amazon Prime" items so my tray will be on my doorstep by Wednesday.

I can hardly wait.

Posted by Cori Kesler at 9:16 PM No comments: