A follow-up to this post in which I decide to run a 10k to help Maia raise funds for her school. 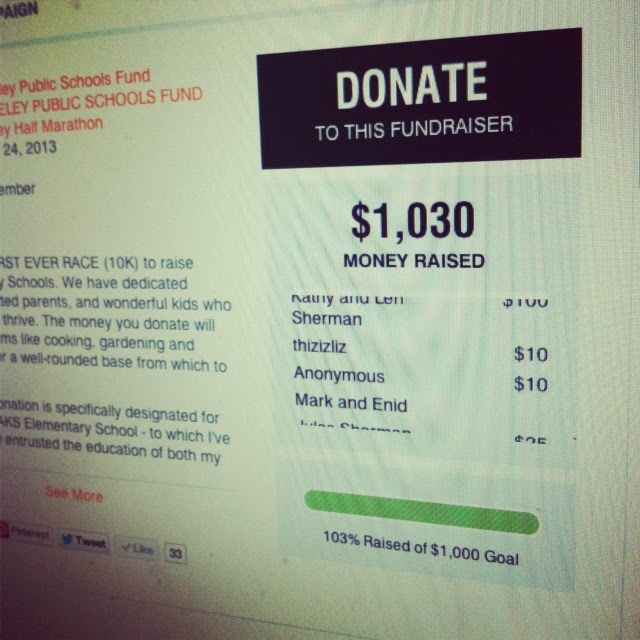 It was close, but thanks to a lot of generous donors, Maia and I surpassed our fundraising goal of $1000. We found out while waiting in line at the neighborhood bakery - I was checking my phone and a congratulatory email came in from Crowdrise. She and I were cheering and jumping for joy and the people in line were smiling at our silliness. It was very bonding.

Running the race was more fun than I expected. I normally like exercising alone, so I wasn't sure what it would be like - surrounded by so many people. But it was fine. I kept my headphones on, listened to my jogging playlist and Nike + Running kept me conscious of my pace.

Surprisingly (at least to me) I was truly motivated by the people who came out to cheer at the sidelines. How awesome are they!? Certainly the two best moments of the race were when my friend Chaz appeared on the sidewalk at the 2nd mile, giving me a great big hug and yelling, "run Cori, run!"; the second was towards the end of mile five when a friend's parked car honked just loud enough for me to look over and catch my daughter's eye - peering out the passenger side window, hands waving, cheering "GO MOMMY!". 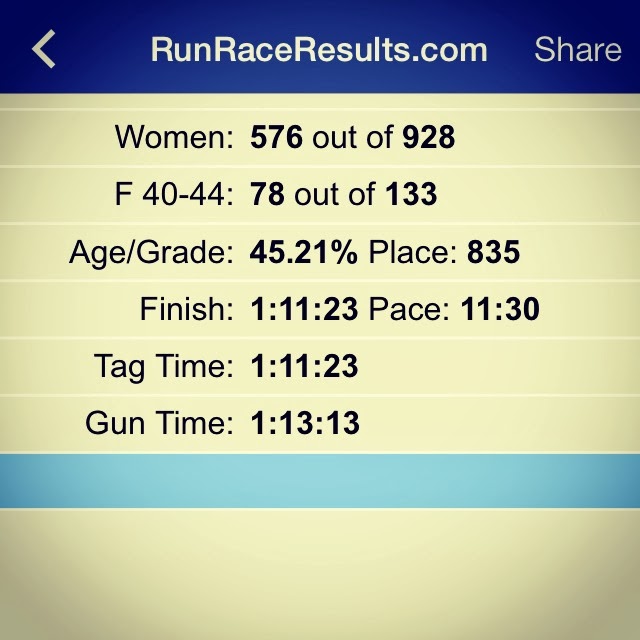 For various reasons (cough ... cough ... Aunt Flo ... cough, cough...) I knew this wasn't going to be my best 10k time. But I ran the whole way (no walking!) and did OK - especially considering the last hill that nearly killed me.

Due to a communication glitch, there was nobody to meet me at the finish line, which was, honestly, kind of a bummer. But not horrible. I received a medal and t-shirts and all the other swag for those who completed the race. Still, I skipped the beer garden and took a shuttle back to downtown Berkeley. 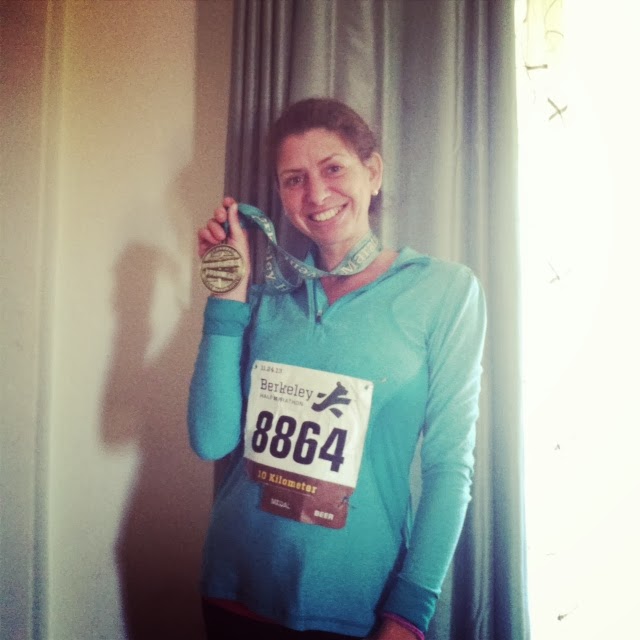 When I finally made it home, Maia greeted me with hugs and kisses and a homemade card with things like, "congratulations!" "you're the best" and "I'm proud of you!" scrawled across it in bright colors. She took my photo, told me to shower, and the two of us spent the rest of the day prepping for Thanksgivukkah.

In all it was a great experience. I learned a lot and reached two important goals: 1.) being fit enough to run a 10k and 2.) raising $1000 for Berkeley Public Schools Fund. Best of all, united in a common cause, Maia and I developed a kinship and closeness that we hadn't yet had an opportunity to develop.

While waiting in an excruciatingly long line at JoAnne Fabrics one day, I pulled an American Girl Magazine off the rack in a last ditch attempt to quiet my whining daughter. Full of fun quizzes and art projects - and advertisements for dolls and books and crafts and clothes (all sold by American Girl) - it was love at first sight. When we finally got to the register I had no choice but to buy it and bring it on home.

Naturally, the requests began. First - Maia asked for a doll that looked just like her. We created it on their website and ordered it for her 2012 Chanukah gift. Meanwhile I discovered American Girl books. Really good books. Everything from historical and contemporary novels, to self-help, to arts and crafts. I embraced them and began gifting them to Maia. She didn't complain.

Eventually Maia read that one of the (American Girl) books she loved had been made into a movie and was available to view via amazon. It was McKenna, about a young gymnast. After watching it 10 million several times, Maia requested gymnastics classes for herself. I signed her up and she continues to go now (8 months and counting) The sport has provided her with exercise and motivation for improvement. 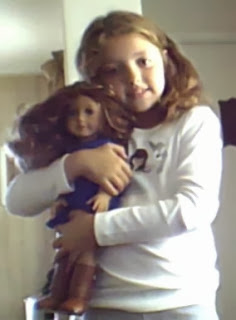 Then came Saige. I don't know which was first - the movie, the doll, or the book. Regardless, we managed to acquire all three (plus a matching "Saige" outfit in Maia-size). She must have read the book 5 or 10 times and watched the movie even more. This is Saige's story:

Saige’s new school year isn’t starting out well. She and her best friend, Tessa, seem to be growing apart. And because of funding cuts, Saige won’t have art—her favorite class—at school this year. Her grandma Mimi suggests that she do something about it, such as lead a "save the arts" parade and fund-raiser on Mimi’s horse Picasso. Soon Saige is training Picasso for the parade, which helps take her mind off her troubles at school.


Then Mimi is injured in an accident, and Saige waits and worries, wondering what she can do. Can she ride Picasso in the parade and make her grandma proud? Can she still raise money to protect art at school? Saige is determined to try. (From the AG website.)


On the drive to school one day, Maia told me her own story: "we only get to go to Cooking Class once a month now and Gardening Class is gone all together. I asked [my teacher] why and she said it's because funds have been cut. I said we should have a fundraiser so we can make enough money to bring the classes back... Maybe a bake sale, or a fashion show or ... a parade."

And everything came together - of course: I could run the 10k option and would join the the team to raise money for Berkeley schools. Even better, I could allocate HALF the money I raise to the school of my choice: Maia's school.

The race is two weeks away and Maia is elated - eagerly helping me figure out ways to approach people for donations. She looks at the fundraising site regularly to view the bar graph that shows how close we are to the $1000 goal. Together we subtract what's been given so far from our final goal to see what we have yet to raise. She watches my training carefully - making sure I'll be up to the task of running 10k in two weeks. It's all been a very very good lesson.

Sunday, November 24 (2013) will see me running my first ever race. Maia (and her brother) will be on the sidelines cheering me on. Last week I ran six and a half miles, so physically, I'm ready. Fundraising is a little slower, but we'll get there. Want to help? A $5 or $10 donation to the campaign "buys" a lot: 1. monetary support for Berkeley Public Schools with half the funds going directly to Maia's school; 2. lessons in math, strategy, and community involvement for my daughter; 3. encouragement for me to continue my quest for fitness in middle age.

I am in no way affiliated with American Girl and this post is not an advertisement.

My friends were getting these little devices called fitbits and posting their steps walked, calories consumed, and even habits of sleep to facebook, twitter and any other social network in which they participated. I was intrigued.

Having not taken part in any regular exercise since 2007 (when Maia became too old for Baby/Mommy yoga) I was the most out of shape I'd ever been in my life. Climbing the BART stairs at Mission Street resulted in immediate breathlessness and sore muscles the next day. Walking Sam was a chore so I'd bring him to dog parks and let him burn off energy while I sat watching. This, combined with the fact that my daily "commute" is about 3 yards from my bed to my desk, had me wondering how many steps a day I took...

Fitbits are expensive so I ordered a good old fashioned pedometer off amazon for about $20 bucks and soon discovered that on an active day I took a total of about 2400 steps. The National Institute of Health categorizes less than 5000 steps as "sedentary" and 10000 as "active." I was officially sedentary.

So I started walking with Sam. I used an app called MapARun (available for free in the app store) to chart mile-long walks around town and began finding ways to add steps to my daily routines, but 10000 seemed absolutely impossible. Until one amazing day it wasn't. 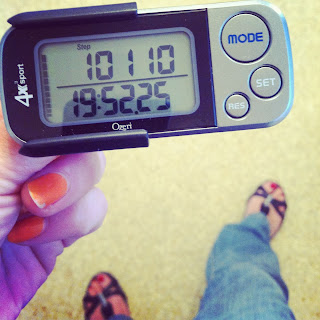 Somewhere in there I read a short story by Chaim Potok called ZEBRA  that was partly about a boy who loved to run. He flew. His adoration of running was described so beautifully that the rest of the tale was lost to me. I could focus only on the boy who ran for the "sheer joy of feeling the wind on his face." I wanted to feel that too.

The first time I ran was towards the end of August. I'd been walking pretty steadily for a couple of months and I'd just read ZEBRA. In the lasts blocks of a 4 miles stroll something made me pick up the pace. Hop. Jog. I ran the rest of the way home. I broke a sweat. I could barely breathe. It felt great.

So I kept up the walk/jog routine for several weeks and soon found myself looking forward to that time. My walk/runs were turning into run/walks and then, just runs. Almost suddenly I could breathe during my exercise and by the 15 minute mark my legs, like Zebra's, would "feel wondrously light".  I began tracking my progress with the Nike+Running App which was incredibly motivating. The first time I ran five kilometers I posted it to my facebook wall. Like my fitbit friends.

It's been about 5 months since the pedometer arrived at my door. For the past month I've kept steady at about five kilometers, four times a week. This past Saturday I managed five and a half miles in less than hour. Which is important because I'm running my first race - a 10k at the BerkeleyHalf - mainly to raise money for my daughter's elementary school (more on that in a future post) - but also to show myself that I can do it. (Which means, by the way, that you can do it too.)

P.S. You can read ZEBRA for free here - the first page is the one that had me running.
P.P.S. You can help me raise money for my daughter's school by sponsoring me in the Berkeley Half 10K. You can do that here. (There will be more on this in a future post.)
Posted by Cori Kesler at 10:37 AM No comments: