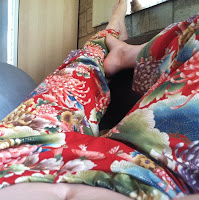 In seventh grade I somehow ended up in a sewing class. I don't even remember why I chose it. I'd never used a sewing machine before - let alone hand sewn a button. None of my friends sewed. It wasn't something that interested my parents.

But I found myself in the sewing class with a dozen machines, a bunch of girls I didn't know and a silver-haired teacher with glasses and a stern face. Our first project was a pair of shorts. For the life of me I couldn't figure out how the front and back came together to create something that could be worn. My mom took me to the fabric store and I chose a lavender cotton with tiny white dots. It wasn't a pattern I would ever wear, but I wasn't really thinking about that. It hadn't occurred to me that this new hobby could produce garments I'd actually be seen in.

Halfway through the semester, my parents and sister went on vacation (being an uncomfortably rebellious teenager, I refused to go.) A friend of my mom's had a daughter in college - Laura - and she came to stay with mr for the week.

Laura arrived with her sewing machine and a stack of Seventeen Magazines saying, "I heard you like to sew, so I brought these projects for us to work on!" The project was to sew two t-shirts into a dress and embellish with ribbons and such. The magazine photos were SO cute. We got started.

Sewing requires a lot of space so we set up on the long table in the kitchen. Snipping and seaming and gathering and sewing. I was fully involved and ended up with - if not an exact replica on the Seventeen model - something that was very close. Done! I looked at the clock and it was half past twelve. Midnight. The last time I'd looked it had been around 8. It was the first time in my life that I'd gotten so absorbed in a task (save reading) that everything else disappeared.

I call that place "the zone" and it's a wonderful place to be. There are very few activities that get me there, but the ones that do are my confirmed passions. Certainly reading was the first - getting so involved in a story that I entered the world inside the book. Then sewing, as I mentioned. In my late teens it became apparent that cooking and preparing for a party put me in that zone. Where others became frazzled and stressed at the thought of entertaining, I found the hours before the guests arrived to be similar to a solo dance around my home - cooking and cleaning and decorating - nothing else mattered. Then in my early 20s - three quarters of the way through a Masters in Jewish Studies - I got a computer and discovered a program called Printshop. It was my boyfriend's birthday and I had no money so I made him an extended card - a booklet really. It took me hours to complete - learning the program as I went along - but time stood still. Once again, it was almost midnight. Little did I know I'd discovered my career.

So here I am. It's 18 years later and I'm a graphic designer. I'm lucky that my work allows me to enter "the zone" on a regular basis. Don't get me wrong! It's not all timeless activity. Reaching that place is still a novelty but it's always a pleasure coming out of it with a beautiful product to show my client.

I bring this all up now because last week a friend bought me - I mean Maia - a sewing machine. I've been teaching both kids to make pillows and bags from scraps of fabric and old clothes. This weekend the kids are with their dad so I thought I'd try my hand at sewing from a pattern again -- first time in a couple of decades. I decided to go with pajama pants (which I needed) and bought a pattern and some gorgeous fabric on sale. I got started at around two pm. Next thing I know it's 4:30 and I have a pair of jammies that are über cool. The afternoon happily melted away. In fact - I forgot to eat - which is great since it's Yom Kippur and I was supposed to be fasting anyway.

How do you reach the "zone?"

Posted by Cori Kesler at 6:05 PM No comments: