(NOTE: This post was originally published at Single Mama NYC Single Moms Sunday series on July 17, 2011. I may or may not have taken the liberty to change certain facts upon this republication.)

Every parent knows that predictability provides a comforting familiarity that children crave. When my kids were babies, I made my plans around nap-time. Missing the afternoon siesta resulted in meltdowns at dinner that could take hours to tame. People thought I was nuts (can't they nap in the car? in the stroller? in my bedroom?) but I learned quickly not to change the things that worked. I learned that routine mattered.

I don't have babies anymore. My kids are 10 and 6 but routine still matters... more for me, than them. 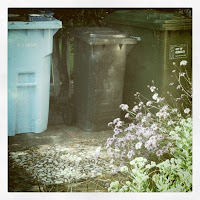 It started with the garbage. Taking it out every Thursday evening had been my husband's job. Now that I was alone the job - like so many other things - was mine. Then one night about a year ago, as I dragged the bins the curb, it dawned on me that I hadn't thought much about the garbage for months. "Remembering" to take it out had become as second nature as bringing in the mail every day...

This was a huge revelation because, although the weekly "routine" seemed to be under control, daily activities were not. The worst of it occurred in the morning rush to school - what to wear, eat for breakfast, pack lunch, etc. DVD's were watched while eating and fights broke out when it was time to leave ("just five more minutes!!!") School starts at eight a.m. We were always late.

So I started to institute new rules and routines. Not just for the kids - but for me. Lunches had to be made and packed the night before - likewise for choosing my daughter's outfits. I had to get up earlier and shower before waking them. They are allowed one mutually agreed upon television show to watch while eating breakfast. But no DS, Computer, smartphone, or anything else that could result in a reply such as "let me just finish this level!!!"

The first month was hard. Like you, I'm tired at the end of the day. I've worked, carted kids around, made dinner, gone grocery shopping and any number of other things. But I made myself prepare the lunches every single night. Upon waking, the relief of having this chore done was significant.

Now it's been almost a year and I've got the routine perfected. I wake every morning pleased that the "night-time-me" took care of the "morning-time-me." My kids wake up to a smiling, un-frazzled mom. We don't have to rush or raise voices. Everything is prepared.

I've listed what I do below. What are your life-saving routines? (Not just morning routines - I'd like to hear about ALL routines that help you manage.)