Pregnancy does not become me. Aside from the usual nausea and fatigue, I break out in acne worse than a pubescent hamburger flipper. It's nasty. Additionally, I'm a small person, so the last trimester is particularly painful. Maia (my second) would push at my ribs with her feet - as if she wanted to stretch out her legs. It became so bad that I had my friend, a midwife, strip my membranes to try and induce labor - something that was done quite successfully during my first pregnancy. It worked: two days later the contractions began.

This is where most women launch into a diatribe about the trauma of their birthing experience. I know this because it's what I did after I had Joe (my first). Descriptions with details about episiotomy stitches and epidural headaches abound. I'm not gonna do that.


The contractions came exactly six years ago on a hot afternoon - soft and far apart - just like they're supposed to. I conducted my day as usual - worked (there was a deadline that had to be reached!), hung out with Joe, a new neighbor came by to visit. I called my doula - a longtime girlfriend who was coming up from Santa Cruz to help me out and take photos - so she could start her one-hour drive. My friend, the midwife, lived next door and checked in on me often. 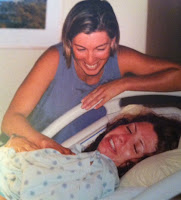 It was late when the contractions became stronger and closer together. My husband (at the time) left me in the capable hands of my doula-friend and my midwife-friend who took shifts while he slept. It was wonderful. The labor was textbook - there was no pain between contractions and it was hard to tell when to leave for the hospital. Eventually my midwife-friend checked how far I was dilated and proclaimed us ready to go.

Once admitted to the hospital my friends and I lit a gardenia scented candle and tried to get some sleep (then-husband was at home with 4-year-old Joe). In the morning they offered pitocin to speed things along. When it was time to have the epidural I questioned it - maybe it's not needed? But the nurse and midwife-friend said to take it then or I there wouldn't be another chance. I took their advice.

My husband (at the time) arrived just as I was starting to push, and Maia slipped out fifteen minutes later. A beautiful healthy baby girl. 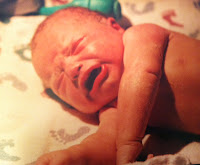 Especially when you compare it to my first birthing experience: with Joe I had back labor and the pain was excruti----oops - I said I wasn't gonna do that.

What's your labor story? I know you want to tell it.

(All photos by Deborah Bresnick)