Angela Pierce, the protagonist in the movie Catfish, is a desperate character who brilliantly paints a fictitious story on facebook. She also paints canvases. The artwork showcased in the film was not impressive to me. The film, however, was - which compelled me to Google Angela Pierce, leading me to her website.

One piece struck a chord and I clicked through to an online store of prints available for purchase. They weren't expensive. I bought it. 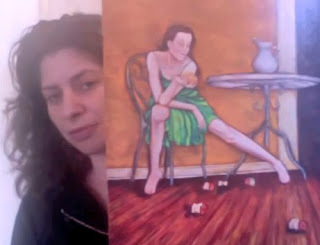 Why this one? I wasn't sure at first, but the print arrived almost a month ago and I think it's starting to make sense.

All those apples - symbolic, at least to me, of temptation and loss of innocence. Each fruit, unfinished - tossed aside before reaching the core, which itself is truth. As if she doesn't want to know - she keeps munching, losing innocence, avoiding the truth. Getting nowhere.

Yet those apples are still so tempting. She takes another.
Crunch.
Posted by Cori Kesler at 3:37 PM 2 comments: