New York City and Me

I posted this last year and someone flagged it for copyright. All the words are mine. The photo is from Flickr's The Commons Collection and has no known copyright restrictions. Last year I didn't have the time/strength to deal with the false claim. This year I do, so I'm putting it back up because - except for the part at the bottom which says it's my first time in NY on my own - it's all relevant. It's just that it's my second time.

High school wasn't a fun place for me. Rather than just plod along and deal with it I decided to find a way around the system.

My school offered several ways to get credits without being on campus. Working 15 hours a week counted as "work experience" so I took on a job (receptionist at a hair salon). Furthermore, I was able to work the system such that I was able to take community college courses at night in lieu of high school classes. As it worked out, I only had to be at school in the mornings. I left before noon and went about my life which, on a good day, meant putting in a couple of hours at work, going home to my apartment (yes, I lived outside my parents' home as a junior in high school - perhaps I'll write a post about that sometime), cooking dinner and then taking off again for night classes. I don't know where I got my energy. But then again, I was 17.

This isn't to say that I didn't have a healthy teenage social life. I did. But my friends were a little older.

Somewhere along the line I got it into my head that I "belonged" in NYC and so that is what became my goal. My grades didn't warrant Columbia and my SATs kept me out of NYU, so, thinking I'd study fashion merchandising, I applied and was accepted to FIT - Fashion Institute of Technology - a SUNY school that required general ed along with marketing, advertising and design courses. They also had dorms.

With all the extra courses I took (summer school included) I was able to graduate high school a semester early, so in January of 1987 - two months before my 18th birthday - I found myself on a plane to NYC.

We (my dad and I) flew directly into a wild winter storm and were stranded in Chicago for two days before we finally arrived. FIT was out of dormrooms, so they cleaned out a storage space and furnished it with a bed, a bunk bed and three desks. I was so pleased to actually, finally be there that I wouldn't have cared if they'd stuffed us in the basement.

My dad and I went shopping for bedding and such and then he had to catch a bus back to the airport. We said our goodbyes on the corner 7th Avenue and 34th Street. To this day he says it's the hardest thing he's ever done. Of course, my memory is absolute elation - I'd made it to New York. And I was on my own.

I lived there for two years. The only constant was my job at the New York Health and Racket Club and a wild ride. Let's just say that I moved through three universities (finally ending up at Hunter) and four apartments. While there I dated wildly, went "clubbing" with my pals and learned how to handle my liquor. By 1989 I was done.

I told folks it was the high cost of living. I was making barely $6/hour and my rent was $900/month. But really, the city was eating me up and spitting me out. It was the late 80's - AIDS had come into public awareness and Madonna was in vogue - Like a Virgin. Rudy Giuliani hadn't become mayor yet and the city was a mess. From my apartment window (granted this particular apartment was on 46th and 10th) I could watch the prostitutes and their pimps and learned who belonged to whom and how to avoid a police raid. Maybe it was too much for me. But looking back on it, I can't help but feel I gave up.

I didn't really make it in NYC.

I left and moved back to California where I worked through my last two years of college at UC Riverside (with a stint or two at Hebrew U) not dis-similarly to how I got through high school: head down, straight on.

Marriage - and the fact that my husband and his family were from New Jersey - brought me back East several times over the past 12 years, but I've not had an opportunity to spend time in New York on my own - without the arguing or the children. Until now.

The stars have aligned in just the right way to stick me on a cross country flight over a long weekend. I've got four days to re-discover New York as a woman more than twice the age of girl I was in '87.

I'm so excited.
Posted by Cori Kesler at 8:49 AM No comments:

Last month my friend Jenna Skype'd to say she was getting her ovaries removed in (yet another) preventative measure to hopefully avoid a cancer relapse. I was in a rare position to afford the $300 plane ticket to Kalispell, Montana and decided to fly out to give her hand. This is the last of three posts about that trip. The first post is here and the second post is here. 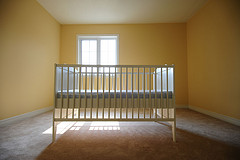 A couple of days before leaving for Montana I received an email from Jenna saying that her cousin's daughter, Lillian, had gone to sleep on Halloween eve and did not wake up. Lillian was a healthy, 13-day-old baby.

Jenna (a graphic designer) volunteered to design the program for the funeral service and was able to complete it a night before she went to the hospital. Prepping for surgery should not include this sort of activity, but no one plans for death, and certainly nothing as unthinkable as this.

The funeral was on Sunday so, three days after her surgery, Jenna was sitting in the front of the sanctuary with her husband, while I stayed in the back of the room, sitting quietly with her boys.

"Let us not grieve that Lillian is gone, but celebrate that she was here. Look around this room, see how many lives she has touched in her short time with us."

Indeed, the room was full of people. Of course, I knew very few of them, and many (like me) had never even met Lillian. But we were all in tears by the end of the slide show that was meant to celebrate her life.

Later, at the reception, I heard Jenna say to her cousin, "I know what it's like to have everything be one way one moment and then totally different the next. Please let me know if you'd like to talk." Of course, the "moment" Jenna referred to was the one where the doctor told her "you have cancer." Those words spoken in that moment changed everything for her.

I'm grateful in my life to have not had such a moment (knock wood). Of course this is not to say that change hasn't happened. It has - but my "moments" have been longer - allowing space to adjust and become, eventually, comfortable. This, I've learned, is a luxury.
_________

My friend Erin Vang has just completed an amazing project called Kaddish in Two Part Harmony and she has dedicated this beautiful Kaddish to Baby Lillian. (A Kaddish is a prayer of mourning). Erin's french horn is particularly lovely.

Translation of the Mourners Kaddish:
May the great Name of God be exalted and sanctified, throughout the world, which he has created according to his will. May his Kingship be established in your lifetime and in your days, and in the lifetime of the entire household of Israel, swiftly and in the near future; and say, Amen.
May his great name be blessed, forever and ever.
Blessed, praised, glorified, exalted, extolled, honored elevated and lauded be the Name of the holy one, Blessed is he- above and beyond any blessings and hymns, Praises and consolations which are uttered in the world; and say Amen. May there be abundant peace from Heaven, and life, upon us and upon all Israel; and say, Amen.

WE WILL ALWAYS HOLD YOU CLOSE

Come to us in our darkest
hour.
We showered you in love
For 13 days I held you
close.
Our sweet Lillybel

I’ll pick a star up
in the sky
Just for you
And think of you all day.

Now we are hugging, kissing,
loving
waiting… waiting for
you to show yourself to
us again