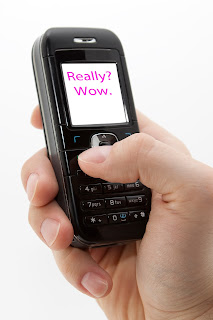 It's now old news that I'm experimenting for a month with an online dating site. The process has followed a predictable pattern: One of us contacts the other via the dating site; emails are exchanged; a date is set; phone numbers are traded in case of last minute conflict; a text message or email is forwarded before the date to confirm; the date happens; a followup text message or email is sent thanking the other for a nice time (or not).

So when someone wants to change the formula I'm put on guard - as happened with this one particular suitor who contacted me via the site. Let's call him "B." B wanted to talk on the phone. I hate the phone. I explained that my reception is bad and text is better but he called anyway. And he talked at me for 20 minutes. I shouldn't say that. He clearly had my profile open on his monitor because he was referring to things I posted on the site ("... here on page 2 you say ..."). At the end of the "conversation" he said that he is looking for "beauty with brains" and that I seemed right for the job ... er, date. Seriously - it was as if he were interviewing me for a business position - but telling me all about the company (him) without asking about the reluctant applicant....

After the phone call I considered breaking the date, but friends said that maybe he was just nervous ... give him another chance .... If nothing else, I decided to stew on it a few days and decide (a'la Ms. O'hara) later.

The next two nights, at around 9, I received text messages from B saying, "sweet dreamz... :)" On the third day a photo was sent... I downloaded it and was relieved to see a view of the SF Bay.... The whole thing was feeling kind of weird, but the date was a couple of days away and, I told myself, I could pull out anytime.

I didn't have to.

Just as I was snoozing off last night, at about the time "sweet dreamz :)" had been popping up on my phone, I received this instead (SIC):


U on Twitter now, tweeting about everything on ur mind, missing in life, ur lack of a relationship with a real and; highly employed Jewish man, about ur college date rape or near one in Israel, what u ate or drank in dirty Berkeley ....omg how PATHETIC.


I made plans ... 2 meet a real high-end woman looking 4 a real relationship with a great guy. Take care get a highly talented PhD therapist, bye :)

I recognize that my online life is transparent - sometimes uncomfortably so - and I expect there will be  judgements made. I'm also not naive, and am fully aware that if I give someone my phone number they can do a reverse search on Google and find me instantly. If a guy wants to stalk me --- I mean --- check me out before a date, they are privy to a lot of information. It's happened before - the reactions are telling.

Admittedly I've put some stuff out there that definitely could be considered pathetic, however, the post to which B. was referring is candid and raw. It speaks about deceit and violence and how events can twist your life in ways never expected. It's about growth. There is nothing pathetic about it. That he reels against this particular piece of writing reveals almost as much about him as the post does about me. Following it up with a crotch shot to my home town ("dirty Berkeley") was unnecessary and frankly, irrelevant.

Clearly this guy was not worth meeting in the first place. Perhaps my on-line life will continue to work as a screen to filter out the assholes, but I worry that it could scare some men off. And while I may be a reflection of what I put up here, no one can really know me until they spend time with me. IRL. And even then, I'm complicated.

Happily so.
Posted by Cori Kesler at 7:17 PM

Email ThisBlogThis!Share to TwitterShare to FacebookShare to Pinterest
Labels: dating